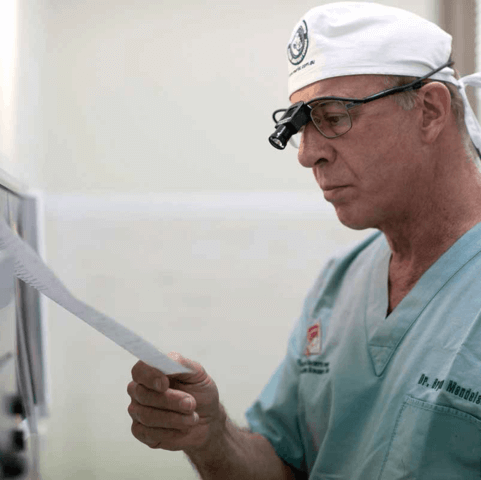 Observing a leading surgeon perform the operation for which he is renowned has become a popular way for surgeons wanting to learn advanced surgical techniques. Bryan Mendelson has been at the forefront of this method, having been invited to perform such live demonstration surgery in over fifteen cities around the world in recent years.

The use of modern audio-visual technology allows the observers to be comfortably seated in an Auditorium in a nearby Hotel or Convention centre, where they can watch the surgery on a theatre screen in high definition, magnified with theatre quality contrast. They can see the surgery better than the operating surgeon himself.
During his most recent live surgery demonstration In November 2019 he performed a facelift in Monaco for the attendees of the Facial Rejuvenation Program. In this Program, ten renowned surgeons from around the world were invited to demonstrate their ‘specialty’ operation. However, the format was a little different. Instead of one surgeon operating on one patient here, multiple surgeons performed their operation sequentially on the same patient, and there were three such patients for demonstration.

The patient Dr Mendelson operated on, a woman in her fifties, received the attention of five surgeons who performed a neck lift, facelift, eyelid correction, temporal lift and finally, fat injections in the cheek, jawline and around the eyes. The invited surgeons came from France, Greece, USA, Belgium and, of course, Australia. At the end of the surgery the result of the combined surgical contributions from these experts looked fantastic.

Held at the Grimaldi Forum on Monaco’s Eastern Beach Quarter, this was the first of a planned four year program sequence offered by ISAPS, using live surgery to demonstrate and intensively teach one aspect of Aesthetic surgery The subject this first, year was Facial Rejuvenation. After performing the facelift, Bryan Mendelson presented a lecture on the anatomical changes involved in facial ageing and the correction of those changes.

This was the last time Bryan Mendelson will be performing this type of facelift surgery demonstration. After many years of demonstrating his advanced, anatomically based technique to other surgeons, he is limiting overseas travel (although his teaching will continue) to focus his attention on smaller alternatives to facelifts. These five smaller procedures have each been intensively developed in recent years to provide the same quality of rejuvenation, for people wanting to avoid the disadvantages of major facelift surgery.